The Next Big Thing: Interview with Terry Lucas 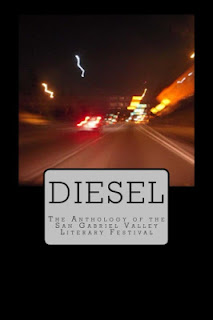 What follows is a self-interview entitled “The Next Big Thing” that is making its way through the blogosphere. Every Wednesday, writers who have a recent or forthcoming book answer the following questions, post them on a blog somewhere, and tag five more writers to do the same the following Wednesday.

What is the working title of the book?

Altar Call. It is, however, published in a compilation anthology of four chapbooks entitled Diesel.

Where did the idea come from for the book?

This particular collection of poems did not emerge from an idea. Rather, the book itself came into being as an accretion of individual poems that adhered to one another after searching through five or six times the final number of poems that made the cut for the final draft.

The title, Altar Call, came last, after adding a “found poem” from a famous fundamental evangelist preacher’s fervent plea for sinners to come forward during an invitation service, typical of those I sat through in scores of revival meetings as a child. It was immediately apparent to me that I had not only found the proem to the manuscript, but the title to the collection, as well.

What genre does your book fall under?

What actors would you choose to play the part of your characters in a movie rendition?

Lee Marvin is a pretty good approximation, both in physical stature and tone, for my father. The poem, “Lesson” begins with the lines “My father once broke a man’s tailbone / With the toe of his roach-killer boot / For having an American flag / Sewn on the seat of his jeans.” I can see Lee acting that out. My father was a man’s man—a heroic/tragic survivor of WWII who suffered from PTSD all of his life.

My mother would be a cross between Rosie the Riveter and the last of the Puritans—maybe an early Barbara Stanwyck.

The only actors who could “play” the roles of the preachers and evangelists in my poems would be the actual people from my childhood they are based on like Freddie Gage, Angel and Homer Martinez, “Little” George Havens.

As far as composites of childhood friends and family members—I have no idea.

What is the one sentence synopsis of your book?

Synopsis is not really the appropriate word choice for one sentence about a poetry collection; it suggests that plot is the most important element. In poetry, unlike in other genres, “language itself” is the answer to the question “what is it about?” I can share what the poet, Dorianne Laux, writes in her cover blurb:

"In Terry Lucas’s Altar Call we encounter not only the human spirit stripped bare, but also the spirit of language made resonant through an attention to and fascination with everyday details: a couple’s first night together in a motel bed, a boy’s first strained swim toward his father, the loud confessions of Christian believers filled with the spit and swagger of hell-fire preachers—A pilled woolen shawl, a limp blue glove, the gauzy smudge/of a palm on the cold back of a gray metal folding chair—these are some of the images that populate and haunt the peripheries of this syntactically acrobatic, passionately crafted chapbook." —Dorianne Laux, Raleigh, NC

How long did it take you to write the first draft of the manuscript?

Who or what inspired you to write this book?

I don’t resonate to the word inspiration, but my father, who was truly bigger than life, influenced many of the poems in this collection, as well as growing up in a pathological religion. I consider myself a victim of childhood post-traumatic, fundamental-religion disorder.

What else about your book might pique the reader’s interest?

Hopefully, the lyricism, the humor, the horrific moments. Hopefully, the intersections with the ineffable in a geometry of survival.

Will your book be self-published or represented by an agency?

Neither. The book is published by the San Gabriel Valley Literary Festival and will debut in their book fair and readings in West Covina, CA on February 15-17, 2013, and can be ordered here:
http://www.amazon.com/Diesel-Anthology-Gabriel-Literary-Festival/dp/0615755496/ref=cm_cr_pr_product_top

My tagged writers for next Wednesday are:

Howie Faerstein, Jane Rosenberg LaForge, and Jenn Monroe, all of whose interviews will be posted on this blog,
and Ivy Page, who will post her interview on her own blog: http://www.poeticentanglement.com/blog/?p=168

Terry Lucas
was born in the Midwest, grew up in New Mexico, and has lived in the San Francisco bay area for two decades. Terry's work has appeared, or is forthcoming, in numerous literary journals, including Alaska Quarterly Review, Best New Poets 2012, Crab Orchard Review, Green Mountains Review, Great River Review, New Millennium Writings, and The Comstock Review. His work has garnered seven Pushcart Prize nominations. He is the winner of the 2014 Crab Orchard Review Special Issue Feature Award in Poetry. His chapbook, Altar Call, was a winner in the the 2013 San Gabriel Valley Literary Festival, and appears in the Anthology, Diesel. His chapbook, If They Have Ears to Hear, won the 2012 Copperdome Poetry Chapbook Contest, and is available from Southeast Missouri State University Press. His first full-length collection of poems, In This Room (CW Books, 2016), is now available, and his second, Dharma Rain, was released by Saint Julian Press in October of 2016. Terry is a 2008 poetry MFA graduate of New England College, and a free-lance poetry consultant. Terry is the sixth Poet Laureate of Marin County California. For more information about him and his work see www.terrylucas.com